I am not sure exactly what this article is going to be about. All I know is that I met my other writing obligations for the month and I need to get me an article written and published on my site now as well. Only one problem, I have no idea what the hell to write about!

I have no traumatic events from my past that have surfaced for me to share about. My recovery at this current time is going as well, if not better than it ever has in the past. And I haven’t made any hair brain decisions that have affected my life adversely I need to come clean about and ask for advice how to handle. Things are simply going really damn well and its rather odd, to say the least.

Why Do I Relapse?

Ya know I often wonder sometimes what is it that drives those of us who have struggled for years and years on end to gain something that resembles long-term sobriety. To turn our backs on the good life being sober affords us and at some point in that first 6 months or so do like the bible says in Proverbs 26:11 “As a dog returns to his vomit so a fool repeats his folly” and relapse time and time again!

I know there are a myriad of factors that contribute to this phenomenon but I was thinking about another contributing factor to add to that list that I had never thought about before. Shoot, I have never even heard it brought up in casual conversation before, to be honest with you.

The thought is this, I wonder if sometimes in recovery we don’t set ourselves up for disaster by simply working our program according to the way we have been taught. We are instructed right out of the gate that alcohol/drugs are taboo in any form or fashion and rightfully so. We are also taught that going to events where alcohol/drugs are present is equally taboo and should never be visited while in recovery.  At least for quite some time anyway, and again, for the most part, I wholeheartedly agree. But; What If?

Here’s A Different Angle To Ponder

What if by focusing so much energy on avoiding those places, we don’t subconsciously drive our damn-selves back to the bottle, needle, or pipe. If by spending so much energy on avoiding those places and the people that frequent them. We don’t subconsciously create a desire to want to try it one more time that is far stronger than the normal cravings we normally have.

For example, the other day I was heading to the mall and right by there is a restaurant. More like a brewery/pub type eatery, very nice and from what I am told they have very good food. So for the past year since I have lived in this neighborhood, I have always wanted to go there someday and have a burger, but hold on stranger danger!!

I can’t go there, what the hell am I thinking, that place is as off-limits as the 100 miles surrounding the old Chernobyl Nuclear Facility. OK fine, not quite, they don’t serve Plutonium, but holy shit they might as well didn’t you hear? I’ll whisper it in your ear come here………….ready; “they serve Alcohol!” Ya, and you know what that means. 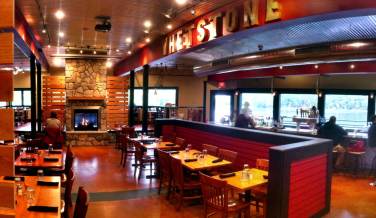 That means since it is not just a restaurant with a bar which is supposedly safe although they serve alcohol. But a Brewery/Pub & Eatery it is forever off limits and will only be visited in my mind as I ride by on the bus daydreaming about their Bacon Double Cheeseburger and onion rings that I’ll never get to try because apparently the Sobriety God’s, one who must be related to Trump, decided I can’t!

So the other day as I was approaching the establishment on the bus I made an Executive decision to go in there like a normal, sane, human being. Not some timid, overly anxious person in recovery, who walks in on eggshells waiting for the first bottle of Guinness to magically fly out of the cooler. Loose its cap en-route, and force its way down my throat, until before you know it I was made to drink.

I mean they serve alcohol so what, just because I’m on a diet does not mean I quit going to the grocery store. I understand the theory behind this belief, and I also believe it should be followed to a “T” for all those new to recovery and definitely is not something to experiment with because if you fail, it could cost you your life.

What Do I Believe Then?

I believe I do not have another recovery after a relapse in me, so let’s make damn sure this time counts. I believe that the 12 step programs are the foundation of my recovery regimen. I also have a newly found and still researching it, but what is becoming a very strong belief in Yoga’s thoughts revolving around the “Feeding Your Demons” idea. Here is a link to an article that explains the idea quite simply, you should check it out its very, very, interesting!

My final belief for now and one that I just formulated this past year as I re-entered the realm of clean and sober. A belief that may not go over as all that popular either but oh well here goes. I firmly believe that based solely on past performance here, based solely on my track record at staying clean and sober using only a 12 step program.

Based only on the statistics I have compiled on my performance at recovery over the past 21 years and 3 months. I believe that left with only the 12 steps to aid me in my recovery in the future that to expect anything other than what I have been getting for 20+ years would be the definition of insane, correct?

So I do not believe the 12 steps in and of itself sufficient enough for some damn reason for this addict to attain long-term sobriety. My Lord, I wish it was, but it hasn’t been for two decades so, well you get my point. Don’t be afraid to utilize whatever means is necessary in order for you to get clean and stay that way. Don’t even worry if nobody else agrees with what you are doing to stay clean as long as it is working for you, my friend.

This battle is for your life, your future, family, and happiness. It is not a popularity contest among the sober clicks in your area as to who may seem the coolest at any given time. It is a battle, recovery is a war, use any and all weapons available to fight your opponent (addiction) and come out victorious. I’ll see you on the front lines Soldier!

About the Author: Marc is a 48-year-old Author, Speaker, and Soldier in a war to loosen the grasp that Substance Abuse has on our society. He is a Father, Son, and friend to all those seeking refuge from this incorrigible disease. Marc resides in the beautiful Pacific Northwest where he enjoys, writing, hiking, and kicking the disease of addiction in the teeth, every chance he gets. As Marc always likes to say, “be blessed, my friends!”